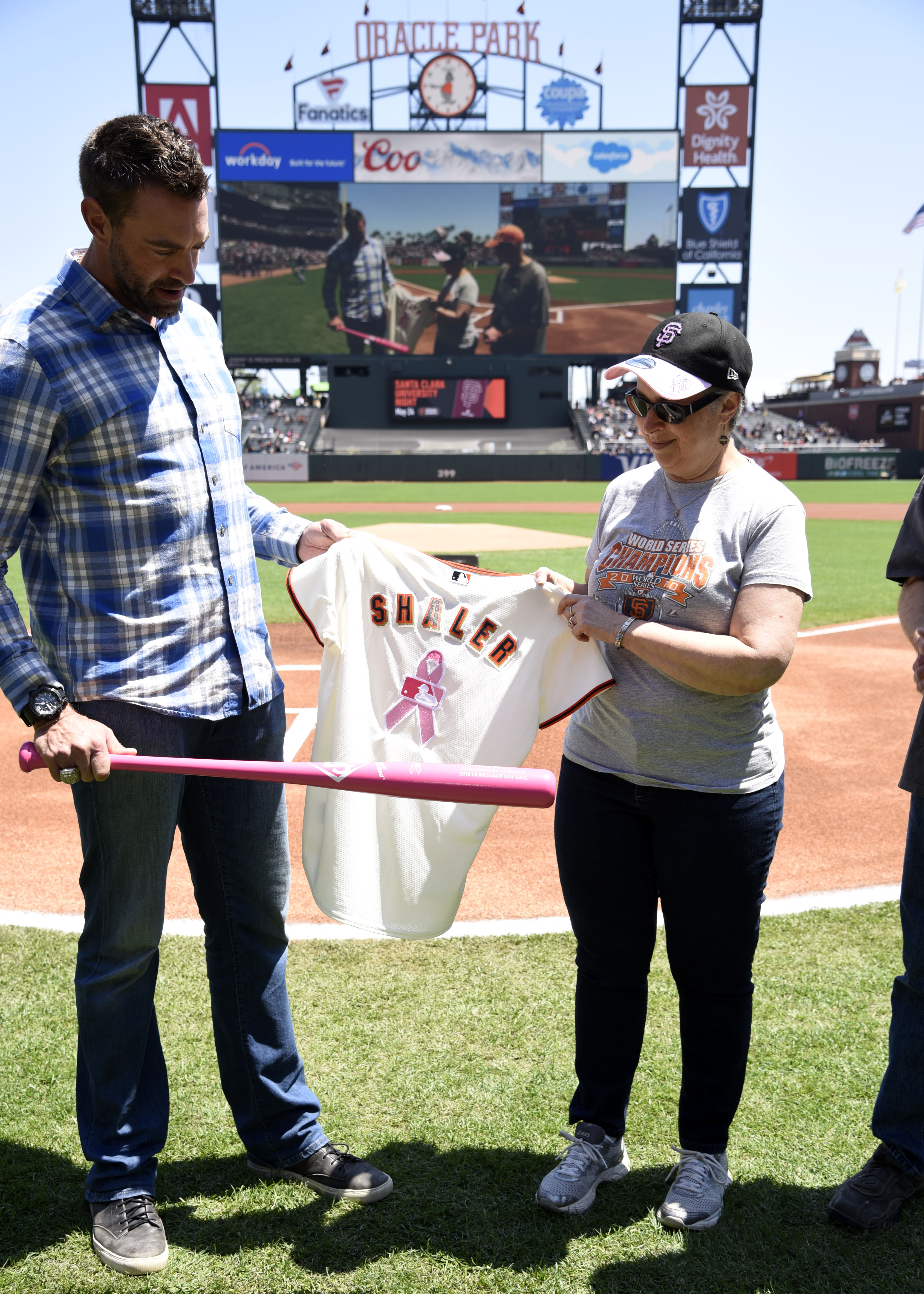 We congratulate Ellen Shaler for being nominated as the Giants Bat Girl 2019.  Ellen was honored on May 12, Mother’s Day,  at the Giants home game,  for her dedication to raising awareness about breast cancer.  Ellen,  is a breast cancer survivor,  who has devoted her time as a volunteer to Susan G. Komen.  She  has also  raised significant funds towards the cure for breast cancer.   We celebrate Ellen Shaler and congratulate her as our Volunteer of the month.

Ellen and her husband, Mike, had a baseball-themed wedding 30 years ago, where the bridal party represented the two in Tigers and Giants caps. She’s excited to represent her National League team, the Giants, as their 2019 Honorary Bat Girl. Ellen was diagnosed with a fast-growing, non-invasive DCIS in 2005, when she was 44.5 years old. The spot was caught in a routine mammogram, during a second look by her radiologist brother-in-law, who lived in Massachusetts. With a family history of breast cancer on both sides, she routinely had him take another look at her films. Due to her age, history, and Ashkenazy Jewish background, it was recommended that she test for the BRCA mutation. After her lumpectomy and partial-breast radiation, she had genetic testing done at UCSF. Sure enough, she was found to be BRCA 1 positive, greatly increasing her risk for female cancers. Just after her 45th birthday, she had her ovaries, uterus and cervix removed, prophylactically.

At age 44.5 years old, she had her next mammogram. There was another DCIS spot in a different part of the same breast. After another lumpectomy, her case was brought before a tumor board. There was unanimous agreement that she have bilateral mastectomies as a preventive measure. She was the last to get on board, but realized that some of her body parts had outlived their usefulness. Just before her 46th birthday, her wonderful surgeon, Dr. Lisa Bailey performed this surgery. Two months later, Dr. Gabriel Kind, of UCSF, performed her reconstruction. After 20 months and seven surgeries, her job became helping others get the quality of care she received. That is when she started increasing her efforts with Komen. Due to the great generosity of those in her circle, she raised more than $8,000 for Komen last Fall.